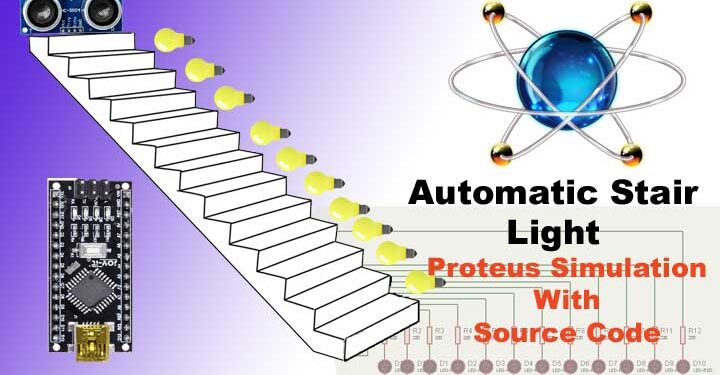 130
SHARES
405
VIEWS
Share on FacebookShare on TwitterShare on WhatsApp

In this edition of our regular Arduino and Proteus tutorials, we have once again come out with a very cool project called Automatic Stair light simulation in Proteus 8.11. This Do-it-yourself intelligent (sensor or manual activated) stair lighting from HomeMade Electronics lights up your stairs automatically when you enter the staircase area. This project saves energy and reduces your electricity bill.

Automatic Stair Light designed and simulated in Proteus. The system detects the presence of humans and lights up the LEDs in sequential order. The real constructed system makes use of Arduino Uno and an ultrasonic or motion sensor for automatic detection. However, I used two push buttons as you can see from the video below for simulation purposes which can also be physically implemented with real functional components. For code and diagram of the project with either ultrasonic sensor or motion sensor, kindly leave a comment.

When the circuit is activated, it lights the LEDs sequentially, starting from where the user is detected. So for instance, if the user is climbing up the stairs, the LEDs will start illuminating from the base of the stairs and gradually move to the top.

As soon as the user reaches the top, the sensor detects the presence and triggers the system to turn off the LEDs again starting from the bottom.

The system can be configured from the Arduino code to change the speed at which the LEDs transition from the ON state to the OFF. To edit the speed, you can refer to the code below:

Check the video demonstration of the project below:

If you encounter any problem, or if you need help constructing this project, leave a comment below.

How to Register your SIM with Your Ghana Card