GSM Based Fire and Smoke Detection and Prevention System 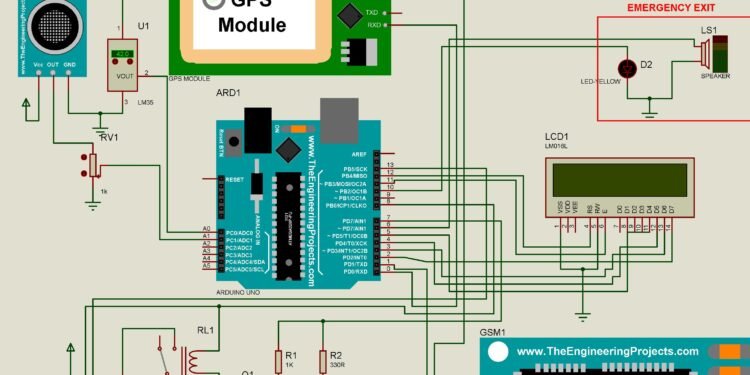 gsm based fire and smoke detector with gps

The project presented here is a GSM Based Fire and Smoke Detection and Prevention System With GPS Location Coordinate designed and simulated in Proteus. The system detects fire, gas, or smoke and sends SMS with the location of the premises to the owner or firefighters. The system can also shut down all gas valves and pump out water or an appropriate extinguisher if connected. This is a simulation but can also physically implemented with real functional components.

Check the demonstration of the project below:

Fire alarm system plays an important role in maintaining and monitoring the safety of all kind environments and situations. However, the usability of many existing fire Alarm systems is well known but could be produced at a high cost. Subsequently, it is not affordable for low-income users.

Therefore, the main objective of this GSM Based Fire and Smoke Detection and Prevention System With GPS Location Coordinate is to make a fire control system with low cost. The project has three main systems the detection system the monitoring system and the appliance system.

The detection system operates as the fire detector and smoke detector. This paper discusses the design and implementation of a fire alarm system using the ARDUINO UNO R3 which operates the entire system. The detectors are placed in parallel at different levels. Any signal from each detector at any level is monitored using a monitoring system.

The appliance system has components like GSM for sending SMS, a buzzer for alarming, servos for an automatic lockdown of doors in emergency exits, and a motor serving as a fire extinguishing pump to stop the fire, and a GPS module to indicate the location where the fire has occurred. The entire system is controlled by a microcontroller, in this the Arduino Uno. The microcontroller is programmed using C-Programming language with ARDUINO IDE.

The system can detect smoke, flame, heat, etc. sensed by the respective modules, followed by the monitoring system which indicates smoke, light, flame, heat, etc. at a particular level. Finally, when the sensors from each level-triggered individually, the main Buzzer operates and an SMS is sent. The LCD will indicate the affected area while at the same time the emergency exit servo motor, as well as the water pump motor, is activated. Read the full project here