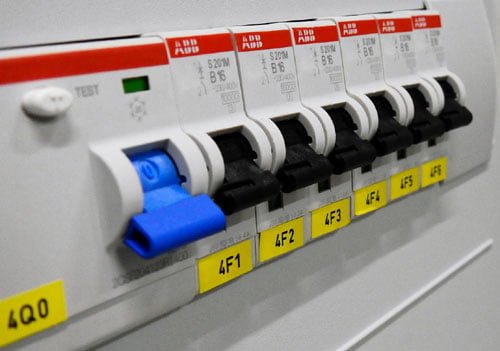 70
SHARES
218
VIEWS
Share on FacebookShare on TwitterShare on WhatsApp

A miniature circuit breaker and ground-fault circuit interrupter (GFCI) has been increasingly used for excess current protection in single and three-phase domestic, commercial and industrial circuits. In fact, they are gradually replacing fuses in all modern electrical installations.

What is a miniature circuit breaker?

The tripping action may either be magnetic or thermal. Some circuit breakers make use of both.

The first condition of the circuit breaker’s operation is fault detection. The operation of these devices is made possible by the heating or magnetic effects of electric current. Circuit breakers for heavy currents are usually arranged together with protective relay pilot devices. This will help to sense a fault condition and to operate the interrupt mechanism. These normally require a separate power source, such as a battery, current transformers, protective relays, and sometimes an internal control power source.

Once a fault condition (overload or short circuit) is identified, the circuit breaker terminals must open to interrupt the circuit using mechanically stored energy contained within the breaker. This energy is normally stored by a spring or compressed air.

Small circuit breakers normally have a manual control lever to switch off the load or reset itself after interruption. On the other hand, heavy-duty breakers use solenoids to trip the mechanism, and electric motors to restore the breaker into normal operation.

The electric contacts used in a circuit breaker must carry the load current without excessive heating, and must also withstand the heat of the arc produced when opening the circuit.

These contacts are made of copper or copper alloys, silver alloys other highly conductive materials. The life span of the contacts is normally reduced by the erosion of the material due to arcing while interrupting the current. Unlike Miniature circuit breakers, high-voltage circuit replaceable contacts.

What is Arcing in Circuit breakers?

An arc is generated when a high current or voltage is interrupted. The length of the arc depends entirely to the voltage while the heat developed is proportional to the current.

To prevent further damage, this arc must be cooled and extinguished in a controlled way, so that the gap between the contacts can again withstand the voltage in the circuit. Normally, vacuum, air, insulating gas, or oil are used as the medium to contain the arc.

Moreover, the arc is extinguished by :

Lengthening or deflecting the arc
Intensive cooling (in jet chambers)
The division into partial arcs
Zero-point quenching
And in DC circuits connecting capacitors in parallel with contacts.

A circuit breaker has the following advantages over the fuse

What to look for when selecting a circuit breaker?

Points to take into consideration when selecting a circuit breaker are;

A ground-fault circuit interrupter (GFCI), is a type of circuit breaker usually designed to operate faster so as to turn off electric power in the event of a fault in the earthing system. This normally happened rapidly in few milliseconds. GFCI works by comparing the amount of current flowing to the installation (equipment) and the amount of current returning from the installation (equipment).